New book I wrote and illustrated, from the good people at http://onipress.tumblr.com!  Please be sure to place your order through your local comic shop.  Thank you in advance for all the love and support! 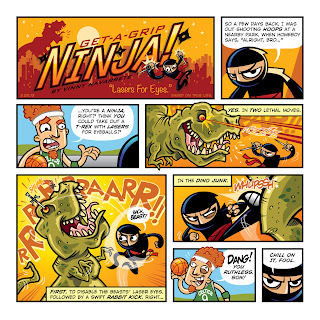 Check out my new "every other weekly" comic strip called, "Get-A-Grip Ninja!"
Follow along with these silly skits as a chip lovin' ninja tries to make sense of it all.
Hope you enjoy, and.....Get-A-Grip!! 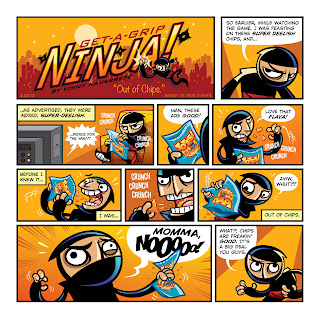 DEAR DRACULA GETS ANIMATED Image Comics/Shadowline graphic novel adaptation to air on Cartoon Network DEAR DRACULA, a graphic novel for kids published by the Image Comics imprint Shadowline, has been adapted into an animated feature for Cartoon Network. The hour-long feature will air on October 16 at 7 p.m. (ET, PT) as part of Cartoon Network's "Spooky Specials" Halloween programming. A scarily sweet story of a young boy named Sam who loves horror films and vampires so much that he writes to Dracula for Christmas instead of Santa Claus, DEAR DRACULA was written by Joshua Williamson and drawn by Vicente "Vinny" Navarrete. Sam gets an unexpected reply to his letter, when Dracula himself shows up on his doorstep, ready to make Sam's dream of being a vampire come true.

The DEAR DRACULA animated feature is produced by Kickstart Productions (Voltron Force, Wolverine and the X-Men, The Amazing Screw-On Head), with a screenplay by Brad Birch (Johnny Test).

"This 48-page hardcover should find a permanent place in a child’s library. It’s especially satisfying for a youngster who loves classic monsters, Halloween and cheese." -The Washington Times

"Dracula is presented as a kindly grownup, and all the horror elements are played strictly for laughs, so even younger children are unlikely to find the book too scary. Behind the scenes is a subtle lesson about learning about and respecting others’ differences, but the creators wisely avoid hitting the reader on the head with an obvious moral." -The Graphic Novel Reporter

"This book is a rarity: a well-crafted, beautifully illustrated all-ages love letter to a horror icon. It deserves a place in everyone's library." -Comics in the Classroom
Posted by Don Chente at 11:49 PM 3 comments: 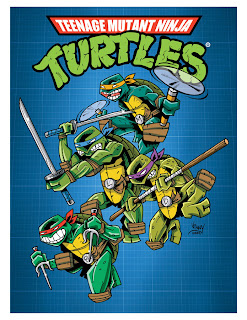 Which one is your fave and why?

My favorite of the 4 brothers is Mikey. He's the funny guy in the group and those twirling chucks were my favorite weapons growing up as a kid.
Posted by Don Chente at 12:52 PM No comments: 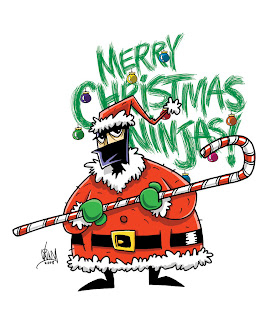 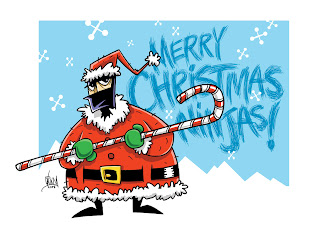 Don't try this at home kids. Leave the jumping off of buildings to Daredevil and his super hero pals.
Posted by Don Chente at 2:51 PM No comments: 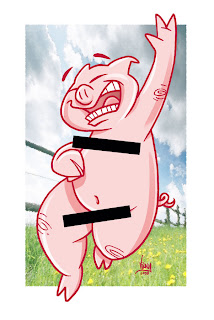 A couple friends asked me to do a "Jam Session",
and the theme was "Freedom", this is the first thing that popped in my head.
Posted by Don Chente at 1:37 PM 1 comment: If you haven't seen the movie "IRON MAN" yet...
well, i dont' know what to tell ya, other than...
GET TO IT!!! It's awesome!! Here is a movie figure,
that i repainted with some bright yellow. Cut off
his hands. Super glued magnets to his wrists, and
magnets to the hands. I'm not sure where these
hands came from. But i liked them for this figure.
I used testors paint, apoxie sculpt, and then a
clear coat spray finish!
Posted by Don Chente at 1:10 PM No comments: